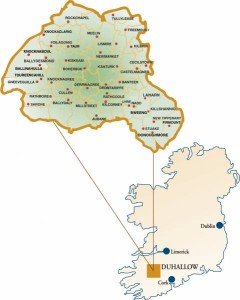 The Barony of Duhallow is located in the North Western part of County Cork and stretches into East Kerry. The population of the region (c. 30,000) is largely rural dwelling, with just 4 market towns and 28 villages spread across 1800 square kilometres. The Barony derives its name from the River Allow, which rises in the parish of Clonfert 10 miles North West of the town of Kanturk. This river flows into the Blackwater near Banteer. The Barony is bounded on the North by Co. Limerick, on the West by Co. Kerry. On the South it is bounded by the Blackwater, and by the Baronies of East and West Muskerry. On the East, it is bounded by the Baronies of Orrery and Kilmore, Fermoy and Barretts and also by the River Clydagh for a short distance. The Barony contains 13 complete and six partial parishes. The Barony contains 562 townlands. Four clans ruled the Barony until confiscations following the Confederate Wars of 1641. These clans were the MacDonogh MacCarthys, the MacAuliffes, the O’Keeffes and the O’Callaghans. The MacDonogh MacCarthys were the most powerful and were overlords of the three aforementioned clans. (CREDIT: Bowman, M. J. (MacCarthy, Jean J., ed.). 2000. Place Names and Antiquities of the Barony of Duhallow, Tralee)